Coronavirus: What we’re doing to prioritize you & your pet's health. Learn More

Vomiting and diarrhea, either alone or in combination are one of the most common problems why dogs and cats are presented to a veterinarian.  Although the potential causes for this condition are numerous, one of the most common causes is inflammatory bowel disease or IBD.  Patients with IBD may have extremely variable histories.  The frequency and duration of signs will range from sporadic to constant.

Vomiting and diarrhea are the most common signs.  It may be at any time after eating or may be on an empty stomach.  The vomit may contain undigested food, froth, blood or bile.  Some patients may have a desire to eat, but then walk away or just have a general lack of appetite.  Some patients will demonstrate lower gastrointestinal signs. Straining to defecate, frequent defecation, painful defecation.  The stool may contain mucus, digested or frank blood.  An important distinction is the type of stool.  Diarrhea may be classified by its appearance, volume and characteristics as being due to upper or lower bowel disease.  Some diarrhea may be consistent with both forms of disease. To make the diagnosis of IBD even more challenging, some patients will have no signs related to the bowel at all.  They may experience unexplained weight loss.

The exact mechanism involved in the formation of IBD is controversial.   It is a complex interaction between the intestinal immune system, host genetic susceptibility and environmental factors (bacterial flora).   It is believed that an irregular or defective immunologic reaction occurs at the level of the intestine to some factor(s) present within the intestine.

It is important to note that inflammatory bowel disease refers to a complex spectrum of diseases that can affect the gastrointestinal tract.  Crohn’s disease is a well known variant that occurs in people.  Some of the forms that occur in domestic pets include lymphoplasmacytic gastroenteritis (LGE), eosinophilic gastroenteritis (EGE), suppurative gastroenteritis (SGE), granulomatous gastroenteritis (GGE) and proliferative gastroenteritis (PGE).  The large intestine may be specifically targeted in histiocytic ulcerative colitis and granulomatous colitis.    Lymphoplasmacytic gastroenteritis is the most commonly diagnosed form of IBD.  Although Boxers, German shepherd dogs and perhaps pure bred cats are at greater risk, this disease occurs in all breeds.  Most cases develop in middle age to older pets, but there is a variant that occurs in young dogs and cats as well.  Eosinophilic gastroenteritis may not be true variant of IBD.  It may represent an allergic or hypersensitivity response to a parasite or dietary component.  Cats may develop eosinophilic enteritis as part of hypereosinophilic syndrome.   These cats may also have abdominal lymph node involvement or mass lesions within the intestine.  Mass lesions will rarely develop in the dog.  Despite the variability in classification of EGE, it remains the second most commonly diagnosed form of IBD.  The other forms of IBD (SGE & GGE) occur less commonly.   Histiocytic, ulcerative colitis is frequently diagnosed in Boxers.   The Basenji and Wheaten Terrier both have unique forms of IBD that occur in their breeds.  Basenji enteropathy (BE) is a severe, hereditary form of LGE.  It most closely resembles immunoproliferative small intestinal disease (IPSID) in people.  Wheaten terriers develop a variant of LGE that may also affect the kidney.

Intestinal disease is not limited to IBD.  There are many other conditions that manifest themselves within the confines of the gastrointestinal tract.   These conditions are also on the rule out list for any patient to be considered an IBD suspect.  Organisms may lead to severe disease within the intestines.  Although bacterial enteritis is not as relevant in dogs and cats as it is in people, the types of bacteria and specific ones can impact the bowel.  Salmonella, Shigella, Helicobacter, Campylobacter and E. coli may lead to severe disease as either a primary problem or as a secondary issue.  Pythium and Prototheca are primary intestinal pathogens.  Non-bacterial organisms such as fungi, Giardia, and Toxoplasma sp. may also lead to severe disease.  Additionally, the gastrointestinal tract may also develop cancerous conditions that may have the same profile as IBD.

The diagnosis of inflammatory bowel disease is relatively straightforward.  The challenge lies in making the decision of when to take definitive diagnostic steps.  As already discussed, IBD may wax and wane for months or years.  Many non-specific therapies such as diet changes and antibiotic therapy may alter the course and symptoms for a transient amount of time.  Additionally, the intensity and frequency of signs may vary.

In order to diagnose IBD, one must have biopsies of the stomach and/or intestines.  Biopsies may be obtained by either surgery or endoscopy.   Both methods have benefits and liabilities.  Surgery allows full visual evaluation of the entire gastrointestinal system.   Additionally, specific attention may be placed on areas that appear visually irregular to the surgeon.  Full thickness biopsies may be obtained.  The advantage of full thickness biopsies is that they allow pathologic evaluation of the outer layers of the intestine.  There are disadvantages to surgery.  The entire procedure poses a greater risk to the patient.  The anesthetic time may be prolonged.   Anesthesia always poses a risk to any patient no matter how healthy they are.  Healing may be an issue following surgical biopsies.  A diseased intestine may not heal correctly leading to incisional breakdown.  Surgery also has a prolonged recovery time.   There may also be issues with pain or infection following surgery.

Endoscopy offers a non-surgical means to evaluate the stomach and/or intestines.    The advantages of endoscopy are that the healing issues, infection and pain associated with surgery are avoided.  The internist may evaluate the intestines and stomach without the need to open the abdomen and intestine.   The procedure is quick in comparison to surgery.  This reduces the time under anesthesia.  The anesthesia would still pose a risk.   At All Pets we will perform most gastrointestinal endoscopies as an outpatient procedure in a non-compromised pet.   Endoscopy has liabilities as well.   The internist must decide on which portion to evaluate.  Most internists will evaluate either the stomach and small intestine (gastroduodenoscopy) or the large intestine (colonoscopy or proctoscopy).   Rarely will the need to perform both procedures simultaneously arise.   It is possible to select the less diagnostic procedure based on history and signs.  This may necessitate the performing of the other procedure.   The endoscope is minted in how far it can travel into the intestine (either direction).  There may be issues beyond the visual level of the scope.   Although endoscopic biopsies are very small and cannot penetrate into deeper layers of the bowel wall, the changes present in IBD usually affect the most superficial layers of the intestine and stomach.   Endoscopic biopsies are excellent at obtaining these tissues.

A proper endoscopy takes more than just an endoscope.  Endoscopy is as much an art as a skill.   Endoscopies should be performed by those who have had thorough training and experience in endoscopy.   All Internal Medicine residency programs emphasize proper endoscopic techniques and interpretation of findings.    In selecting an endoscoper, make certain that he/she has the proper training and equipment.  Endoscopy equipment is not inexpensive and not all endoscopes are created equal.   All Pets uses only Olympus digital endoscopy systems for all of our gastrointestinal endoscopies.

Small Intestine from a patient with IBD 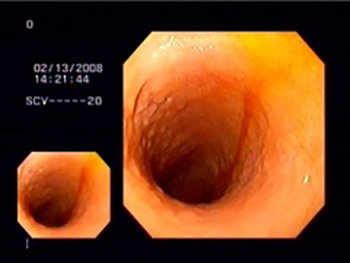 Stomach from a patient with IBD 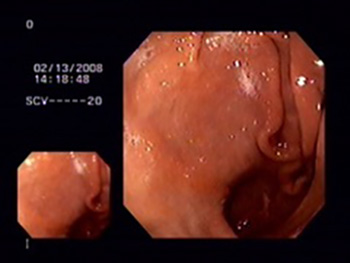 The treatment of IBD regardless of which variant is present largely revolves around a combination of dietary modification, antimicrobial therapy, antiparasitic therapy and immunosuppressive therapy.   There are many approaches to the treatment of IBD.  Some veterinarians will incrementally increase therapy.   Although the data is lacking on the most appropriate means to treat this syndrome, it seems as though a single step system does not work well.